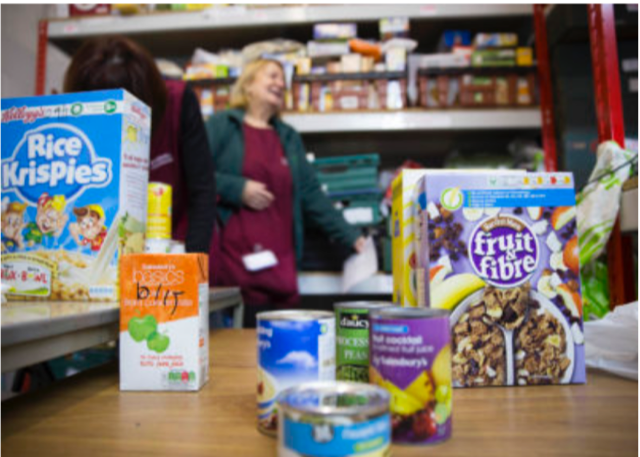 “The foodbank was there when we really needed it, it was an absolute lifeline.”

At New Life Community Church Loughborough we don’t think anyone in our community should have to face going hungry. That’s why we provide three days’ nutritionally balanced emergency food and support to local people who are referred to us in crisis. We are part of a nationwide network of foodbanks, supported by The Trussell Trust, working to combat poverty and hunger across the UK.

If donating please scroll down and click Loughborough Area Foodbank as a one off donation therefore it goes straight to Foodbank, thank you!

“The people at the foodbank were wonderful, they understood and saved us.”

Having always worked and never claimed benefits, Holly, 29, from Chichester was bringing up her four-year-old daughter, Phoebe alone. She was determined to give her the best possible start in life, but when Phoebe suddenly fell ill, Holly was forced to turn to a foodbank for help.

The council flat that Holly was living in was in a deprived area with drug dealing and dog fouling taking place in the corridor outside her door. Holly was adamant that her daughter should have a better environment to grow up in and was offered alternative accommodation near her parents but at double the cost. As well as borrowing money from her parents to meet the cost, Holly was working part time. At the same time, she had been selling second-hand clothes online and the shop she was working in noticed its success and offered her a space selling clothes in their shop.

Under normal circumstances, Holly could just about scrape by, but when her daughter became poorly and had to spend three weeks in hospital, she was forced to close the shop temporarily. When Phoebe recovered, they returned home to empty kitchen cupboards, bills racking up and no income to support them.

Holly felt unable to ask her family for help again and after discussions with the local Citizens Advice Bureau she was referred to the foodbank.

Holly said: “The people at the foodbank were wonderful, they understood and saved us.”

Although Holly’s situation is still precarious, knowing the foodbank is there in an emergency is a huge weight off her shoulders.

Need a Lift to church?

Keep up to date with all our upcoming events - subscribe to our calendar.