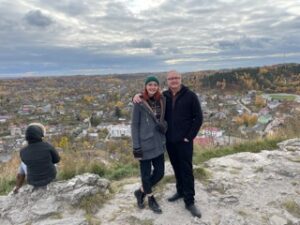 God’s design for marriage is a life-long covenant of companionship (It is not good for man to be alone, Gen 2v18, Malachi 2v14), and for procreation (Gen 1v28). Marriage is monogamous between a man and a woman (Matthew 19v4-6). Christian marriage is a foretelling and proclamation of the union between Christ and His Church (Ephesians 5v32).

Each spouse should take care of the emotional and sexual needs of the other, in all holiness. (1 Peter 3v7, 1 Cor 7v5, 1 Peter 3v1). Marriage is a glorious and wonderful gift from God that honours Him, blesses those involved, stabilises society, and proclaims Christ to the world.

God hates divorce (Malachi 2v16) because people are made in His image and should display the love and faithfulness that represents Him. God is love, and so He also hates that which injures people. With this in mind Christians ought also to hate divorce and do all things in their power to avoid it (1 Cor 7v10). This should never be expressed through an ungraceful attitude. However, the marriage contract can be dissolved, sometimes without sin on the part of the one divorcing, but all other times as a result of sin. We will consider the Biblical cases below.

It was also said, “whoever divorces his wife, let him give her a certificate of divorce.” But I say to you that everyone who divorces his wife, except on the grounds of sexual immorality makes her commit (or experience) adultery, and whoever marries a divorced woman commits adultery.”

The exception clause above states that when a person’s spouse commits adultery, they can divorce their spouse without it being sin. This, of course, is not an obligation and the preference is always to forgive and remain married, where possible. We will look at the other elements of this passage in the remarriage section.

Paul is saying that if a non-Christian spouse deserts the marriage, the believer may let him leave. Divorce in this case is not sin. The word used for enslaved is also used of widows who are no longer bound to their dead husbands (v39).

We are now called to seek to understand and apply the above text in the light of other passages of scripture, as scripture always interprets scripture (Sola Scriptura).

Jesus warned that not everyone who calls Him Lord is actually a Christian, but rather that His followers are known by their fruits (Matthew 7v21). The Apostle John warns of the same in his first epistle, as does the Apostle Paul.

Christians are those who not only profess to believe but also:

Growth as a Christian is not linear and we can go through times of temporary back sliding, and fall into sin, but the result will be repentance. However, the above are the overall pattern of the believers life.

In the case where two professing christians are married and one of them acts in a seriously sinful way towards the other, as in the case of domestic abuse, Matthew 18v15-20 should be lovingly invoked. The aim is repentance and restoration.

“If your brother sins against you, go and tell him his fault, between you and him alone. If he listens to you, you have gained your brother. 16 But if he does not listen, take one or two others along with you, that every charge may be established by the evidence of two or three witnesses. 17 If he refuses to listen to them, tell it to the church. And if he refuses to listen even to the church, let him be to you as a Gentile and a tax collector.

The end of the process of church discipline is considering the unrepentant, offending person as an unbeliever – as they show no sign of being a believer. There are two ramifications that follow.

The above application of 1 Corinthians 7 is mainstream evangelical and also finds support in earlier periods of church history, notably in the Puritan era:

Again, if the husband threateneth hurt, the believing wife may flie in this case; and it is all one, as if the unbelieving man should depart. For to depart from one, and drive one away by threats, are equipollent. (Ibid., III, 688)

For he that upon malice flieth away from his mate, is to be holden in the same terms as with an unbeliever, who departs upon detestation of religion, and the service of God

For if one party drive away the other with great fierceness and cruelty, there is cause of desertion, and he is to be reputed the deserter.

Following the teaching of the Puritans, English law used to have as a cause for divorce, Constructive Desertion, where a spouse had deserted the marriage by brutalising their wife / husband, but remained in the house. This was abolished when divorce laws where liberalised, given the fall of Christian influence in the UK. The sinful, no-fault divorce was then born.

These are important Biblical qualifications that prevent further victimisation of the victims of domestic abuse, demonstrating the compassion and love of God. It may be that a period of separation that seeks the change of the unrepentant spouse is appropriate, but divorce would not be sin.

If two professing believers separate and there is no adultery or serious unrepentant sin that has warranted Church discipline, then they are not free to divorce, but only to be reconciled to one another. Counselling and help from the elders of the Church will be appropriate.

The Bible recognises remarriage, however, such remarriage may either be blameless or begin

“…And I say to you, whoever divorces his wife, except for immorality, and marries another woman commits adultery.”

Firstly, Jesus recognises that remarriage can and does happen. Jesus does not say that a person just lives with someone else, but rather marries them. In the case of the woman at the well in John 4, Jesus says she has had five husbands and the man she now has is not her husband. He recognises that they were real marriages, even though sin may have been involved in each of them. These are contrasted to her current relationship that does not constitute marriage; they are merely cohabiting or sleeping together. Therefore, a re- marriage is still a marriage even if it started sinfully.

Additionally, the clear implication of the teaching of Jesus is that remarriage, that has followed a divorce caused by adultery, does not result in the new marriage being adulterous or sinful. A positive re-statement of Jesus teaching would be:

“Whoever divorces his wife because of sexual immorality, and marries another, does not commit adultery.”

Repentance for the previous sin is necessary but it would be further sin to break up the new marriage. This is also consistent with Deuteronomy 24v1-4 that forbade divorced men in the Old Covenant from remarrying their previous spouse.

The divorce becomes legitimate by the adultery of the new marriage, as the grounds for divorce of sexual immorality has been met. Therefore, the sin is an (serious) initiating ‘one off ‘ sin, not a continual sin of living in adultery within the new marriage. Nevertheless, repentance for past sin must be encouraged and sought.

The following should be noted from these verses:

* Within the context of whether a divorce has happened legitimately, remarriage is permissible and not sinful.

In the Greco Roman, and Jewish worlds it was virtually universally accepted that the purpose of divorce was remarriage, which is what the certificate of divorce allowed for. The Jewish Mishna records the words written on the divorce certificate as ““Thou art free to marry any man.” This being the case, Paul’s words would have been understood by his readers in the way that we have interpreted them. Much greater clarification would have been necessary for the opposite interpretation.

This understanding of remarriage is a mainstream, conservative evangelical position, both currently and historically. Again, from the Puritan era:

“If they… cannot be reconciled to their former spouse because that spouse is an unbeliever or is remarried, then they are free to either remain single or be remarried to another believer (1 Cor. 7:39; 2 Cor. 6:14).

Manifest it is also, that wedlock was partly instituted for the eschewing of adultery. Wherefore when the guilty party is divorced, the unguilty is at liberty to marry
again, if he or she cannot live sole, according to Paul, if thou cannest not be chaste, marry, for better it is to marry than to burn in concupiscence (leaf lxxvii).

any man or woman, being wrongfully forsaken by his or her yoke-fellow, may lawfully then marry another, as being disburdened of the former yoke, without any sinne, on their parts, in that thing, procuring it. Onely we professe, that in cases of this nature, a just and orderly course must bee taken .

It is also a current conservative evangelical position, demonstrated by theologians like Dr John McArthur, who writes:

“If they… cannot be reconciled to their former spouse because that spouse is an unbeliever or is remarried, then they are free to either remain single or be remarried to another believer (1 Cor. 7:39; 2 Cor. 6:14).

Final remarks of Divorce and Remarriage

In this paper we have laid out the biblical commands, principles and implications of the Bible’s teaching on divorce and remarriage. We have noted that these are by no means isolated or novel interpretations but rather, currently and historically evangelical. We recognise, however, that this is a secondary issue on which Christians disagree.

At New Life Community Church Loughborough we seek to live in grace, not insisting our own will on others, on secondary issues, but allowing discussion and graceful disagreement. Such graceful discussion can bring about further light and understanding for all parties involved. In the end, each person must be convinced in their own minds (Romans 14v5).

Pastorally, we will always treat those who have suffered the tragedy of divorce with the utmost sympathy and care, recognising there are no winners in divorce, only pained losers. We will seek to love, guide, encourage, and instruct those affected under our care.

Finally, we recognise that this interpretation of the appropriate texts is open to abuse by those seeking to legitimise an illegitimate divorce or remarriage. This is true of all teachings on grace in the Bible and is not a deterrent to holding a carefully nuanced biblical position. It is for the Elders of the Church to ensure that such a position is maintained in the varying situations that are presented. Unbiblical hard lines, although, seeming more clear cut, are not honouring to God, or loving towards people. This we seek to avoid.

This site uses Akismet to reduce spam. Learn how your comment data is processed.